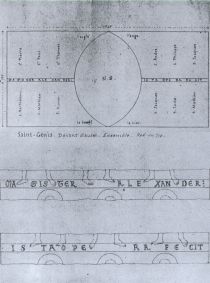 This is the first painter on wood with signature active in Catalonia. The sign was placed in a missing altar frontal from St. Genis de Fontaines (Roussillon) –“MAGISTER ALEXANDER: ISTA OPERA FECIT”-, in a frieze that divided the panel into two registers, on both sides of the central mandorla. The appearance of this piece is known by a drawing by De Bonnefoy, Epigraphie Roussilllonnaise (1868). The analysis of the drawing as well as the comparison with other similar works, such as the missing canopy of Saint Martin du Canigou (Conflent) (ca. 1195) –which is also known only through the founding miniature of the Canigou guild in 1195– or the antipendia preserved in Santa Maria of Orellà (Conflent) and Sant Andreu of Baltarga (Cerdanya) (MNAC 15 804). They allowed to deduce a foreign personality for this painter who worked in his workshop along with local painters. Usually, panels were organized in three sections: the central one, with a Majestas Domini, with Christ inside a mandorla shape, enthroned on a seat cushion, surrounded by the Tetramorphos; while the lateral sides –with the exception of the Canigou example– are divided into two registers, with several characters.

From a technical standpoint, these antipendia are characterized by the use of pastiglia relieves in the halo, friezes and even the background, all combined with glazed metallic leafs. The face of the central Christ, with an elongated canon, is usually finely drawn while clothes present a soft and rounded modelled of the folds. All this is combined with a massive use of lights in the drapery and carnations.

Although his signature is only located in the missing altar frontal of Fontanes, is believed that behind the name of Magister Alexander is hidden a foreign painter, active in Northern Catalonia, in the surroundings of Saint-Martin du Canigou monastery. There, around 1195, he might have produced the canopy represented in the abbey's chartulary (Ecole des Beaux-Arts Collection Jeuan Masson f. 38), as well as the altar frontal located nowadays in Santa Maria d'Orellà church (Conflent). This antipendia arrived at Orellà’s parish church afterwards, in 1784, coming from the Canigou monastery. Likely, since his beginnings in Canigou, Magister Alexander would have created ​​his own workshop, with the collaboration of local painters, and developing his activity between the last decade of the XII century and the first one of the XIII. It would be a direct connoisseur of the Komnenian Byzantine art, which probably came from the eastern Mediterranean, particularly Cyprus, and will adapt gradually, through his collaborators at the workshop, his formulas to Latin West uses. If the elongated and translucent faces of his figures, the variety of the facial types and the representation of the Evangelists writing in rolls (Orellà) are genuinely Byzantine, the pastiglia use for the background and borders, the metallic leafs and a wide range of shade colours for the clothes, denote a familiarity with the art of the Crusaders. Therefore, Orellà should be considered one of his first works, while Baltarga, more suited to Latin uses, would be an advanced production, made ​​after 1196, the year in which the troops of Viscount of Castellbò and the Earl of Foix looted the church of Sant Andreu.

From the analysis of Baltarga and Orellà's altar frontals, historiography always had agreed to point both works as an example of the activity of a Greek painter (or an imitator of the icons painting), active in Catalonia between the late XII century and the beginning of XIII (FOLCH I TORRES; COOK-GUDIOL). However, thanks to the publication of De Bonnefoy drawings by M. Durliat in 1951 the leading role to the Byzantine renewal of the Catalan panel painting was given to Magister Alexander, as an artist coming from the Eastern Mediterranean. To him and his “Byzantine group has been attributed a large number of works:  Fontanes, Canigó, Suntag Collection, Baltarga, Orellá, Abegg Stiftung, La Llagona. Quite rightly, Y. Carbonell-Lamothe (1975, 1992) contributed to outline the origine of the Orellà painter as native from Cyprus and active in the times of Lusignan dinasty (post. 1192). He might arrive to our lands through Eudoxia, a Byzantine princess, which married since 1174 with William VIII of Montpellier. This painter should has been Magister Alexander, a great connoisseur of the Byzantine painting formulas in Cyprus, just as the comparison with the drawings of the Oxford, Magdalen College, ms. Gr. 3 (Xipre, ca. 1190) shows or his evocation of the Holy Keramion face in Baltarga and Orellà (CASTIÑEIRAS 2008, 2010, 2012).

“MAGISTER ALEXANDER: ISTA OPERA FECIT” (This work was made by master Alexander)