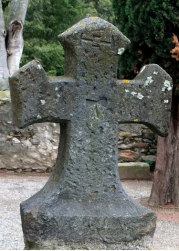 Guillelmus Marchi de Volono, also known as Guillaume March du Boulou, was a 13th-century sculptor or stonemason master who worked in the area of northern Catalonia, more exactly in the ancient counties of Vallespir and Rousillon. We have knowledge of his authorship due to the autograph signature placed in a baptismal font in the church of Santa Maria del Prat, currently named Santa Maria d’Argelers (Àrgeles-Sur-Mer, Roussilon). The church appears in the documentation in 1178 as Parrochia Sancte Marie de Prato.

The inscription refers to: MAGISTER G[UILLELMUS] MARCHI DE VOLONO ME FECIT (Guillem Marc del Voló made me). Its burden in the outer edge of the baptismal font and it is enclosed in a cartridge of 25’6 x 8’5 cm. The height of the letters is 2’7 cm. The name, Guillelmus, it is diminished to his initial G and the words are separated by three vertical dots. A symbol shaped in the form of two rhombuses overlapped, sliced by a cross, separates the word magister of the rest of the name. We can recognize the same symbol, in other examples, such asthe epitaph of a dean from Limoges and in a letter to Rimini. Both are dated in the first quarter of 13th-Century.

Guillelmus Marchi has been identified as a local sculptor or stonemason who worked in the Roussillon Region. Notwithstanding, some scholars (Aloïsi, Catafau, Martzluff, Passarrius 2008) linked the artistic production of Guillelmus with the marble quarries of Ceret and L'Écluse.

The hypothesis is based on the fact that the church of Sant Martí de Fenollar (Maureillas-las-Illas) preserves a stone cross (from a tomb) that has been attributed to this artist. The piece contains two symbols that evoke two polkas (chopping hammers), which according to some authors recall Guillelmus's way of working. However, for now we don’t have enough evidence to link  brands of Sant Martí de Fenollar to Guillelmus, and therefore, to confirm his work in Vallespir.