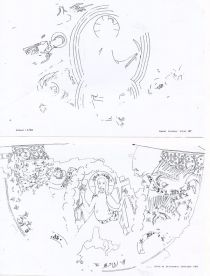 We know that relationships between Cluny and Catalonia are testified since a long time, especially with the abbot of Ripoll, Oliba who became abbot of Saint-Michael of Cuxa in 1011, than bishop of Vich in 1018.

The identification of patrons for the Burnand church is difficult to find. The church is mentioned in the cartulary of Saint-Vincent of Mâcon in the 11th century (ecclesia Sanctorum Martini et Nicetii de Burnant) as a dependence from the bishop of Mâcon. In a charter from the Abbey of Cluny, dated from 1142, appears the name of Petrus de Burniaco  being present for the signature of an act by Gauthier, bishop of Chalon, concerning a chapel at Burgum Novum. Then the documentation is mute till the 17th century.