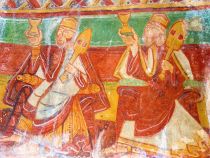 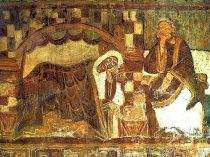 Mixt media: the first layers has been executed as fresco painting while the finishing touches are executed as tempera. Master of Fenollar used a narrow range of colours. Blue and green are almost absent.

Louis Bonnefoy found mural paintings of Sant Martí del Fenollar in 1860. Its stylistic particularities are also to be found in the apse of La Clusa (Les Cluses), which is placed at a distance of only 3 km. Thus, it could be presumed that this painter was a local master.

Nevertheless, this master seem to have received foreign influences since the dynamism of the figures’ attitudes and dresses could also be found in Poitou mural painting. Poitou mural paintings had a significant influence in Catalonia. At all events, his style defuses Catalan hieratic forms from late-11th century and the beginning of the 12th century. His style could be associated with West France mural painting. Nonetheless, Fenollar master’s style has many personal features that allow acknowledging his hand in La Clusa, mainly in the curve triangles that fashion the shadows upon the chicks, in the sinuous drawing of the lips as well as in the shadows. Nevertheless, there is enough evidence of the participation of another artist due to the main differences between some figures, especially the evangelists Mark and Luke whose style differs from the other evangelists and the rest of the paintings.

On the other hand, it is worth considering Fenollar Master influence in the portal of Moissac given the fact that Sant Martí de Fenollar was ascribed to the abbey of Arles-sur-Tech, which at the same time was ascribed to Moissac. Moissac’s representation of the Elderly men seated and holding a viola and a glass seem to have been Fenollar’s model. Furthermore, on the basis of Fenollars’ representation of an angel that holds the symbols of two of the Four Living Creatures (Luke and Mark symbols) for the legs as in the wall paintings of Taüll and Engolasters it could be establish a strong link between Fenollar and Catalonia. Similarly, epigraphy in the paintings is associated with a local tradition since the verses from Sedulius’ Carmen Paschale referring the Four Living Creatures is also to be found in Csesnoves, Mur, Saint-Plancard and Perpignan Evangeliar.

Firstly, on the basis of stylistic reasons these settings could be dated between the beginning and the second half of the 12th century. Pierre Ponsich (1974) was the first scholar who suggested a chronology on the basis of historical reasons since he associated the traditionally attributed name of the region – « la Mahut » – to Mahaut or Matilde of Barcelona, Ramon Berenguer III’ daughter. This scholar also identified Mahaut with the viscount of Castellnou, to whom some lands in Fenollar were given in 1131. As a result, Ponsich placed the paintings between 1131 and 1157. This hypothesis has been supported by most scholars (Poisson 1991; Piano 2010; Leturque 2015). Nevertheless, this suggestion is based on debatable reasons. Despite the fact that Fenollar Master catalogue raisonné only includes these two close settings, his influence could be also perceived in Arles-sur-Tech paintings, which were undoubtedly made around its consecration date in 1157.