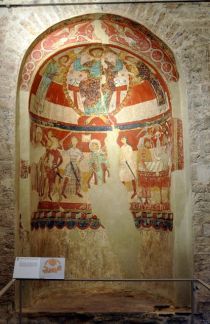 Painter active in Cataloniae during the second half of the 12th century author of the altar frontal «de la Mare de Déu i els Profetes» or «d'Espinelves», preserved in the Episopal Museum of Vic (MEV 7) and the wall paintings of the martyrdom of St. Thomas Becket at Santa Maria de Terrassa (c.1180-1190).  Collecting the testimony of Ch.L. Kuhn (1930: 41-43), who underlined the formal relation between the wall paintings of Terrassa and the altar frontal, W.W.S Cook and J. Gudiol established a unique identity for the two pieces, ascribing them to the «Master of Espinelves», a «mural painter in Terrassa and painter of panels in the workshop where the frontal of Espinelves was executed, probably the one in Vic, the most obvious case of dual activity carried out with full technical knowledge of both matters.» (COOK & GUDIOL RICART, 1950, p. 91-92).

Through a transversal collaboration between the Magistri Cataloniae project (UAB), the Episcopal Museum of Vic (MEV), the Centre de Conservació i Restauració de Catalunya (CRBMC) and the Autonomous University of Barcelona (CETEC-PATRIMONI) the wall paintings of Terrassa and the altar frontal of Espinelves have been analysed using the most advanced methods of infrared spectrography. The results of the study of the pigments and painting techniques used have already demonstrated that the painter deployed techniques used in Catalan altar frontals, specifically the tinfoil (Petula Stagni) in candlesticks and possibly it was suggested also in some haloes of Terrassa (VERDAGUER-ALCAYDE 2014), which definitely seems to confirm the presence of an artist familiar with the Catalan tradition of panel painting of the second half of the 12th century (SÁNCHEZ 2014:87-106)..

Likewise, we can also find many stylistic similarities between Espinelves and Terrassa. The treatment of the hair is particularly symptomatic, conceived from two large blocks divided by curvilinear incisions, as we can observe in the Christ of Terrassa and the one depicted on the altar frontal of Vic. The similarities are also remarkable in the treatment of the garments, where the Master of Espinelves shows a great virtuosity and originality. In such a way, we have already seen how the short robe, showing a glimpse of the underpants, appears similarly in both ensembles; however, other decorative details have gone unnoticed. In particular, I refer to the floral motif of four petals used by the painter repeatedly in the garments of the characters of higher position, thus establishing a clear relation of dignity. This motif appears only in the robes of Christ and Becket in the wall paintings of Terrassa, and in the clothes of the Virgin, Christ, the prophets and two of the Magi in the altar frontal of Espinelves. Then, the articulation of the bodies of the characters is very suggestive. At Terrassa, John of Salisbury slightly bends his head and stretches his arms following the same model that was used in the figure of the king Melchior in the frontal of Espinelves .

Most likely, the Master of Espinelves was a painter trained in the Vic cathedral workshop, who worked at Terrassa given the relationship between Terrassa and Vic, both houses of canon regular that were associated with the distinguished house of Saint-Ruf at Avignon (SÁNCHEZ 2014:87-106). This hypothesis allows us to definitely relate both techniques and to speak of a common apprenticeship for these painters. In this respect, we must remember the most recent research on the painter's training in the first half of the 12th century, developed by M. Castiñeiras suggesting a peculiar curriculum vitae for these masters, going through a progressive artistic apprenticeship in the various arts –illumination, panel painting and wall painting– probably within the large ecclesiastical institutions such as monasteries or cathedrals. It is not possible to say if the Master of Espinelves was cleric or layman, but it is clear that his work was influenced by a clear sense of the ‘religious’. In fact, the devotional vocation of its art and the numerous epigraphs –tituli et explanationes– which accompany the paintings of Terrassa and Espinelves, suggest a profile of a painter very close to the clericus or the conversus, instructed within the monastic or cathedral schools. He provides his paintings of epigraphs painted with a highly elaborated calligraphy, showing a familiarity with the monastic culture, where he probably received his training

In the corpus of the Master of Espinelves could be included, in addition, a wall painting fragment from the Cathedral of Vic (MEV, 9702) showing striking similarities with the curtains decorating the lower register of the paintings of the ensemble at Terrassa and, especially, with the folds in the garments of some characters in Terrassa (Becket, Salisbury and Edward Grim) who wear long robes (AINAUD, 1952-1954, p. 205-209; BARRAL, 1979). Currently, they are one of the few ornamental indications of the former pictorial decoration of the Cathedral of Vic. If we accept the hypothetical training of the Mestre d'Espinelves in the workshop of this cathedral, it would not be absurd to think of a possible participation in the pictorial ornamentation of the cathedral, especially considering the existing similarities between this pictorial fragment and the paintings decorating the apse of Saint Mary at Terrassa.