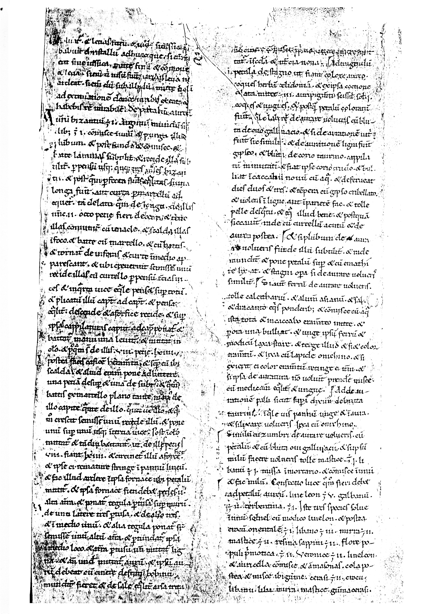 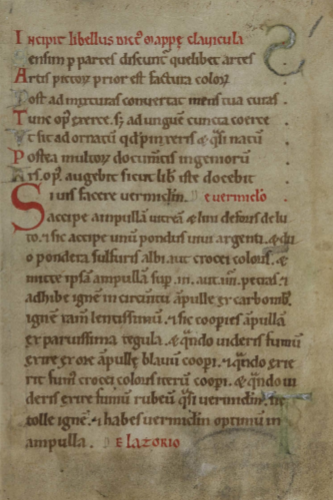 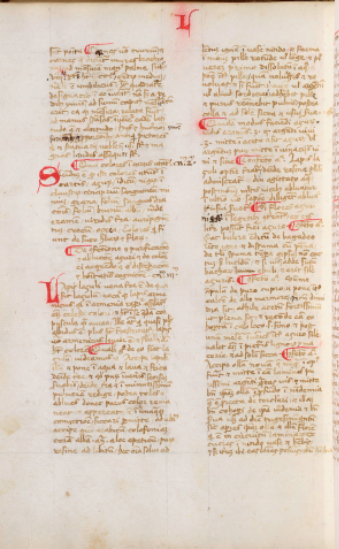 Medieval compilations or treatises of art technology have become in recent decades an important working tool for various fields of study -like art history, history of technology, conservation and restoration of cultural property- as they describe materials and techniques used by artists and craftsmen in Middle Ages. More than 400 treatises are currently known, written between the 8th and 17th century. Traditionally these treatises of art technology were considered as simple technical instructions related to artwork or crafts of doubtful face value. This idea has contributed to their understatement within studies of medieval art, amplified perhaps by the apparent lack of any theoretical section. However, it has to be noted that in these recipes it is possible to glimpse medieval aesthetics and theories, as the taste for sumptuousness or the concept of light and beauty; in short, the characteristics of an art that highlights the intrinsic quality of materials, and that attempts to transform the modest in splendid. In this sense, it could be possible to consider these compilations of recipes as the theory of artistic practice, a set of technical rules and standards codified into recipes so art could be taught, learned and exercised.

The extent and content of medieval treatises of art technology are quite varied, but roughly three groups can be distinguished, depending on the date of manufacture and the techniques described: early Middle Age compilations of recipes related to sumptuary arts (between 8th-12th century, as the Compositiones ad tingenda or the Mappae clavicula); compilations of recipes related to a specific technique, very close to the concept of a workshop manual (most common since the 13th century, as the Montpelier manuscript dedicated to painting techniques or De Arte  illuminandi dedicated to manuscript illumination); finally,  single recipes and instructions copied in any free space in a manuscript (usually ink recipes, as for example in many notarial protocols).

The Compositiones ad tingenda (or Lucca manuscript) of the 8th century is the earliest known compilation of recipes in the West. The content of this collection of recipes is focused mainly on sumptuary arts: metalwork, glass, mosaics, gilding, gold and silver writing, dyeing and preparation of various raw materials (alloys, solders, artificial pigments, enamel, glass, niello, varnishes, or imitation pearls and precious stones). Of a very similar content is another treatise known as Mappae clavicula, compiled and copied since the 9th century. This fact indicates that both treatises belong to a particular group of texts of medieval art technology, hereinafter referred to as Compositiones-Mappae clavicula group or just Mappae clavicula family. The main key to understanding the causes of the sudden compilation, copy and dissemination of the Mappae clavicula treatises are a general sense of loss of technical know-how in Western Europe between the 4th and 8th centuries, related especially to sumptuary arts and to the manufacturing of luxury objects. The sources of inspiration to recover this lost knowledge were looking towards the ancient Roman splendour and the comparison with the majestic and luxurious art of Byzantium. And in this scheme should be framed the systematization of knowledge in the form of collections of recipes of art technology since the 8th century. The main features of these treatises are: a content based heavily in Byzantine sources; a production located geographically in the area between north-eastern France, southern Germany and northern and central Italy; and a copy carried out in the network of monastic scriptoria, in most of the cases related to the Benedictine order. At present, it is only known one manuscript containing recipes of the Mappae clavicula family in Spanish libraries. It is the Manuscript 19 of the National Library of Spain, Madrid, an organized miscellaneous manuscript (basically a computus with other technical texts and excerpts) of the 12th century in Caroline minuscule. The ninety Mappae clavicula recipes are found at the last folios, as the manuscript ends abruptly due to damage and the loss of the last part. Although the manuscript is not conclusive to locate unequivocally, currently the most accepted hypotheses attributed rather a Catalan (copied either at the monastery of Santa Maria de Ripoll or at the Cathedral of Girona) or Italian origin. What does seem quite certain is that the Madrid codex copies an original manuscript written in Beneventan script at the scriptorium of Monte Cassino. However, some of the recipes may have been improved in Catalonia like, for example, the one dedicated to a gilding process (deuratio facilis, fol. 201r) or the use of yellow-glazed tin foils (petala de stagno fol. 203r). Both techniques are well documented in the panel painting at the monastery of Santa Maria de Ripoll and the yellow-glazed tin foils was used systematically in the Catalan frontals of the twelfth and thirteenth centuries.

Two important treatises, that meet this chronological and conceptual framework but don’t present a direct relation with the content of the Mappae clavicula family, need a special mention. The first one is the so-called Heraclius treatise (or De coloribus et artibus romanorum). It consists of three books: the first two in verse written around the 10th century and of Italian origin; and the last in prose written in the 13th century and probably of French origin. Far too little is known about the author (aside from the name or pseudonym Heraclius) or where or when this compilation of recipes was formed. However, it should be highlighted that this is the text that better transmits this idea of loss of technical know-how related to sumptuary arts, as the author constantly remembers the past Roman glory. The second treatise is the Schedula diversarum artium (or Treatise of Theophilus). The Schedula of the monk Theophilus (another pseudonym) is probably one of the best-organized medieval treatises on art technology with an internal consistency that makes it an essential historical reference. This is due to the fact that technical instructions are structured in three books (painting, glassmaking, metalwork and related decorative techniques), each one with a prologue that deals with art theory and ethics. Moreover, the abundant iconographic references within the text indicate precisely the work of a compiler and editor who gave way to all this in a practical manual. Nevertheless, it should be stated that the main function of the treatise was the serve as a text-guide to the abbots and bishops to control ecclesiastical or monastic workshops in order to carry out their artistic enterprises, as well as a manual to provide a theoretical and practical training, essential to prepare future successors.

In a second group can meet roughly the compilations of recipes describing a specific artistic technique (usually painting or manuscript illumination). In addition, they reflect a coetaneous artistic practice, filtered through the experience of its author. This type of recipe books begins to appear from the 13th century, although its peak is situated along the 14th-15th centuries. Its quite probable that their elaboration can be a direct consequence of the secularization of culture and of the specialization and professional organization of artists. Many of these recipe treatises are no longer anonymous as the name of the master served to give authority to the work (Alcherius, magister Petrus, Cennino Cennini, etc.). In addition, the language of recipes is gradually cleared up by older names or Byzantine origin and incorporates progressively coetaneous craft terminology. In short, these texts are very close to workshop manuals, where master’s writings regarding several technical procedures -tested and experienced by himself- were practical guides and instructional texts for his apprentices. Among these treaties need special mention treatises like Liber de coloribus illuminatorum sive pictorum, a recipe book of the 15th century, probably compiled in France; the De arte illuminandi of the 14th century dedicated to the technique of manuscript illumination of southern Italy; or the Treatises of Jean Le Bègue, where the author compiled during several years recipes on painting and illumination techniques and he finally copied them in a treatise around 1431, accompanied by a glossary of synonyms in order to make easier the use and understanding of recipes. Cennino Cennini’s treatise and the Montpellier manuscript are probably the most extensive and systematic texts regarding painting techniques at the end of the 14th and the beginning of the 15th century respectively. Cenino Cennini writes his book Il libro dell´arte around 1390 and offers long and detailed descriptions about drawing techniques, pigments, brushes, media, oil painting, mural painting, preparation of panels, plaster, adhesives, gilding, varnishes, preparation of parchment, illumination, work on fabrics, glass, mosaic, and many other materials, at the end of Middle Ages and beginning of Renaissance in Italy. The Liber diversarum arcium or Montpellier manuscript is anonymous and it was written in Latin around 1430, in Venice or the surrounding area. It is one of the most extensive treatises with about 580 technical instructions, grouped in four sections (or books) and deals mainly with painting techniques (preparation and mixing of pigments and binders, varnishes, drawing, tempera, oil painting, mural painting, painting on glass and ceramics, as well as other auxiliary decorative techniques).