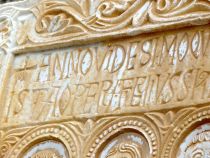 The term FIERI IVSSIT refers the patron’s initiative or undertaken, that is the person who ordered for the work to be made and could pay for it to be made. This one is often associated with the donor although this is not always the case. Similarly, it could be easily mistaken for the founder of the monument, even though this does not always happen. The form FIERI IVSSIT is recorded since Early Middle Ages and it mainly expanded from the 9th century on while it became predominant by the 11th century. Most examples from prior to the 11th century belong to a group of captions that were made up with derive forms of the verb offerre. In this last case, the work becomes the main object of the caption whereas the patron’s role is auxiliary. On the contrary, the other form reinforces the patron’s role in ordering the making and completion of the work. Nevertheless, it sometimes happens that the imperative condition of the term is attenuated by replacing the term IVSSIT for ROGAVIT o FECIT (X FIERI ROGAVIT / FECIT). Even more often, FECIT assumes by its own means the meaning of the common form. In this case, it is highly usual to mistake FECIT for “made” (vid. FECIT). Nonetheless, this is to be found in textual sources very often and in epigraphic sources to a lesser extend. In the cases when the reference to the patron seems to be highly likely the certainty would only come from a deep analysis of all the parameters. Nevertheless, sometimes it is impossible to solve the problem. In some cases, the form gives the floor to the object with several forms: X ME FIERI IVSSIT. It also happens that FIERI could be replaced by FABRICARE / COMPONERE / PINGERE..., as terms that best express the nature of the action.

The title and status or even dates usually follow patron and donor’s names. In some cases, the total amount that has been paid is also specified. Sometimes, the epigraph includes a sentence in which the hope of seeing their initiative or generosity fully accomplished in the afterlife is expressed. Very often, this petition, which is sometimes extended to the whole family, could be summarized by the form ORATE PRO ME as addressed to the audience. It is worth noting that the common form is often preceded by a liturgical expression as HONORE DOMINI / IN NOMINE DOMINI, or even IN HONORE, which is followed by the name of the Virgin or the name of the Saint to whom the work is devoted.

The term FIERI IVSSIT is to be found in every media and several examples are very well recorded during the medieval period. In the case of architectural sculpture these captions are usually placed in a privileged spot, giving the floor to the audience while focusing on commemorating this patrons and donors. Sometimes, patron’s name followed the craftsman’s name. The name of the object that has been commissioned or donated as well as the whole building and its partial parts are usually carved along with the caption.

The patron and the donor naturally wield social consideration since it is provided by their status. This also makes it possible to explain why their captions are placed in a privileged spot (sanctuary, portal…), mostly because these captions commemorate their role as patrons and pious men. This also enables us to better understand the recurrent presence of their portraits in architectural sculpture.

As it has been mentioned before, the epigraphs with the form X FIERI IVSSIT are generally placed in privileged spots whereas these epigraphs are usually not as well placed in the case of small objects. Nevertheless, in some small objects some epigraphs are also placed in a privileged spot. This is the case of the reverse side of the so-called cross of Herimann (Renania, 1050-1056), where the Archbishop of Cologne ordered to carve twice an epigraph with the commemoration of his initiative. On the upper register, upon the carved image of the Praying Virgin the form FIERI IVSSIT followed by the patron’s name was carved. On the lower register, his name was carved once again even thought it was placed aside the portraits of the Archbishop and his sister, who was abbess of St. Maria im Kapitol.  Similarly, according to Villanueva’s account, countess Guisla was portrayed as a patron inside a medallion beneath the feet of the Virgin in the golden frontal of Girona’s Cathedral. This praxis became very common during the High Middle ages. Further to Romanesque Art, there is a large number of patron portraits depicted carrying the design of the building to whose construction process they are associated. These portraits are mainly placed in the portals. Within this context, the design has a double valence since it has both a commemorative and votive value and it is totally associated with the caption beneath it. This caption usually allows identifying the portrait’s makers. In some other cases the generosity of the donor is symbolically highlighted due to its location aside the representations of Psychomacia and, especially, the scene in which Greed is flattened by Length. This is the case of a capital from Notre-Dame du Port en Clermont-Ferrand.