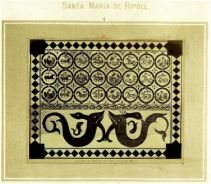 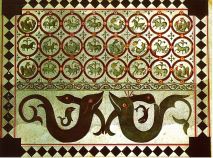 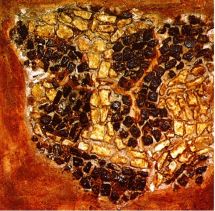 First half of the 12th century.

During the first half of the 12th century, probably during the abbacy of Pere Ramon (1134 - 1153), the Monastery of Ripoll enriched its abbey with new works, in order to increase its prestige. These included the portico (from around 1140), the canopy, the mosaic and the cloister (the latter was starter around the second half of the 12th century, beginning with the north gallery).

Relatively little has been said about the 12th-century mosaic in the presbytery. Only two original fragments survived(one in the Ethnographic Museum of Ripoll and the other in the private Rogent collection in Collbató). The mosaic we see today is the result of Elias Rogent's restoration in the 19th century. In order to know the entirety of the Romanesque one, we must refer to a drawing by Josep Mª Pellicer i Pagès from 1888.

The uniqueness of the mosaic is undoubtedly the signature of a figure called Arnaldus which we can read it in the drawing by Josep Mª Pellicer i Pagès. Unfortunately, the original fragment of mosaic that contained his signature has not survived. Nevertheless, this is an exceptional testimony, as no other signatures from the Romanesque period have been found on a mosaic.

Arnaldus left the evidence of his name in the left border of the mosaic composition, where we can read "AR NA L". It is likely, therefore, that he was the author of this work. To find the signature of artists in the Romanesque period is rather exceptional, and the one of Arnaldus can be added to that of others of great importance, such as Magister Alexander on the frontal of San Genís de Fontanes, Elisava on the Standard of Ot, Arnau Cadell in the cloister of Sant Cugat del Vallés and Ramon de Bianya on the lid of the sarcophagus of Ferran de Soler, among others.

The drawing and the description of the mosaic were published by the historian Josep Maria Pellicer i Pagés, from Ripoll, in 1888, who guessed what was missing. According to his theory, the pavement was a rectangle that occupied the whole surface of the presbytery, measuring 11 metres long by 9 metres wide. It was composed by two registers, the upper one with 24 medallions and the lower one with six dolphins, placed symmetrically in pairs and forming curved lines that shaped the letter ‘M' - the monogram of Mary - so that the faithful would remember the Mother of God to whom the monastery was dedicated. One of the dolphins had three red fan-shaped stripes emerging from its head. In the lower left corner of the outer border was the signature of Arnaldus, AR NA L: every group of two letters were placed inside a square, leaving the space to complete the entire name ARNALDUS. The letters were large and made up of small tiles, each one within its circle, applied using the opus tessellatum technique.

The upper rectangle of the mosaic was completed by 24 medallions, arranged in three bands of eight circles each and joined together by smaller circles. Within the larger circles a series of animal depictions was visible: felines, lambs, basilisks, snakes, roosters, peacocks and cetus. It is probable that the marine iconography of the mosaic was inspired by the depictions of the manuscript of Ripoll Ms. Vat. Reg. Lat. 123, from the 11th century, as one can see in two of the mosaic's medallions with the representation of Cetus (Ibarburu, 1984), as well as in the confronted dolphins that recall both the constellation of the Dolphin on f.198v of the manuscript of Ripoll, and also the "CETE GRANDIA" of the embroidered tapestry of the Creation of the Girona Cathedral Museum (Castiñeiras 1995, 2011), the latter being closer to the time of the mosaic. We should not forget that, in addition, the local tradition interprets the dolphins as a metaphor for the location of the monastery, between the two rivers that cross the town of Ripoll (the Ter and the Freser). To complete the composition, in every empty space formed by the union of four circles, there was a cross whose branches ended up in fleurs-de-lis (Pellicer, 1888).

The materials used to make the mosaic were autochthonous from the region of Ripoll, and the colours used in the composition were mostly white, black, red and orangey-yellow.

Historiography had mistakenly identified the Arnaldus of the 12th-century mosaic with another monk who lived in the 11th-century in the Monastery of Ripoll, during the abbot-bishop Oliba's abbacy, and who was also called Arnaldus. This attribution has been justified by the iconographic influence in the mosaic of the manuscript of Ripoll Ms. Vat. Reg. Lat. 123 - from the 11th century, and by the signature of Arnaldus as magister scholarum in the prosopopoeia of the manuscript Ms. 42 of the Crown of Aragon, also from the 11th century (Pellicer 1888; Pijoan 1914; Puig i Cadafalch1920, 1925). Something similar happened for the portico which, although it was created in the 12th century, we know that its figurative repertoire takes inspiration from 11th-century manuscripts.

The latest studies that deal with the issue (Barral 1973, 1979; Castiñeiras 1995, 2011, 2013) state that the mosaic should be dated to around the first half of the 12th century, the one that Eduard Junyent calls the second period of the monastery's greatness. According to Barral, the placement of a new mosaic and a new canopy aimed to enrich the presbytery of the Ripoll abbey; Castiñeiras adds that Prior Guillelmus was probably the supervisor of the new works at the Ripoll monastery, during the abbacy of Pere Ramon (1134-53), and dates the mosaic at around 1140, coinciding with the creation of the portico and the canopy (Castiñeiras 2013).

The discovery of the mosaic and its destruction happened almost simultaneously. The first news of the mosaic comes from Jaume Villanueva, who visited the monastery in 1800, although he did not mentioned its state of conservation. The most important events that contributed to the destruction of the mosaic were: an earthquake in 1428 that brought down the barrel vault of the basilica; the following reconstructions, mainly those between 1826 and 1830 and after the fire of 1835, as well as the collapse of the Gothic vault in 1860. The reconstruction by Elias Rogent (1885 - 1893), together with the total abandonment that preceded it, finally canceled what remained of the mosaic (Llagostera, Peig, Pladevall 2015).

The definitive destruction of the mosaic took place during the intervention of Elias Rogent, as part of the excavation under the presbytery with the aim of locating the crypt (the current necropolis) of the basilica, together with the extraction of a sarcophagus, found in 1882 just under the mosaic. When some excavations in the presbytery and thetransept of the basilica, from 1969 to 1976, led to the removal of the modern mosaic, they confirmed that the Romanesque mosaic had completely disappeared.

Mosaic in the presbytery of Santa María de Ripoll (currently disappeared). Only two small original fragments are conserved (one in Ripoll Ethnographic Museum and the other in the private collection Rogent de Collbató).