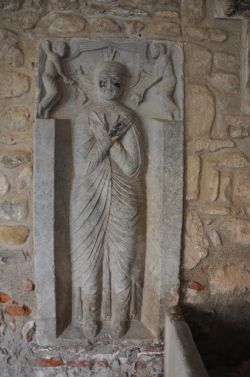 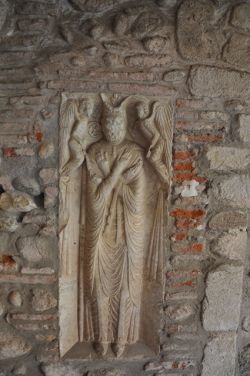 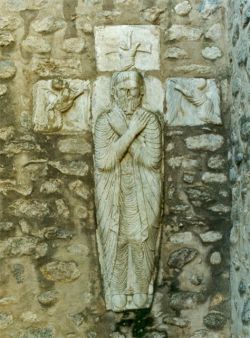 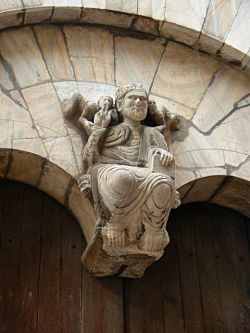 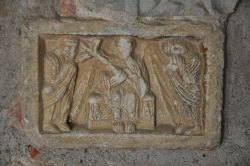 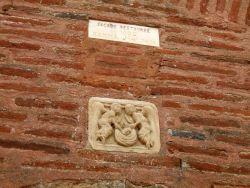 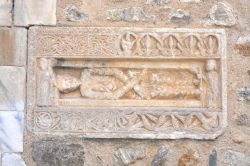 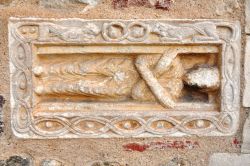 End of the 12th Century- first quarter of the 13th Century

Old Counties of Rosselló and Vallespir and Bishopric of Elna

Sculptor active in the old county of Roussillon during the first quarter of 13th century, known thanks to the autographic inscriptions conserved in two sepulchral stones embedded in Elna’s monastery cloister: the Gisant of the Bishop Ramon de Vilallonga (1211-1216), and the sarcophagi cover of Ferran de Soler (†1203) coming from the disappeared Cistercian priorate of Santa Maria de l’Eula in Le Soler (Roussillon). The last contains an autographical inscription with a very debated interpretation, that some scholars read as r[aimundu]de bia/ ja me/ fe/ e i/ maz/ e se/ re, meaning “Ramon de Via made me and now I’ll be a statue” (PUIGFERRAT, 1993, p.401-402)

In addition to the two sarcophagi, both signed and presently embedded in the cloister of Saint Eulàlia and Saint Julia Cathedral in Elna, an array of pieces located in the Roussillon is also attributed to Ramon de Bianya, such as the Gisant of the Knight Guillem Gaucelm de Tellet (†1211), preserved in the atrium of Santa Maria d’Arles monastery (Vallespir). Marcel Durliat (DURLIAT, 1973) was the first to notably enlarge the sculptor catalogue including in his production, besides the already mentioned Guillem Gaucelm sarcophagi, a considerable number of pieces: a bas-relief from Elna’s cloister, embedded in the meridional gallery wall representing the Three Marys at the tomb of Jesus; the Portal of Sant Joan el Vell church in Perpignan; a bas-relief located above the entrance of Saint-Jacques de Canet-en-Roussillon church, coming from Sant Martí del Castell, with an elevation animae scene, and two funerary stones embedded in the occidental façade of Saint-Genis-des-Fontaines church. Likewise, the French historian put forward Bianya’s participation in executing some of the capitals of the occidental gallery of Elna’s cloister, in particular, the capital representing Adam and Eve’s creation, and a pillar representing King Herodotus.

During the last years, the catalogue raisonné suggested by Durliat has been enlarged with several pieces located in Catalan territory, specifically in Lleida and Urgell. Thereby, the group of capitals in the apse of la Seu Vella de Lleida, attributed to the second workshop, have been placed in Bianya’s orbit; the statues of saint Peter and saint Paul in Sant Pau d’Anglesola church façade, and a capital coming from the Church of Santa Maria de Tàrrega kept in the Museu Comarcal de l’Urgell-Tàrrega (c.1200).

Thereupon, the tympanum of the entrance of Santa Maria de Vallbona de les Monges was also associated with the Roussillonais sculptor (ESPAÑOL 1997: 578-581). The same author attributed Arnau de Vilanova’s sarcophagi to the master, given that it echoes the iconography of the elevation animae of the deceased that appears in other funerary pieces of Bianya. The latter attribution is a capital coming from Sant Pere de Rodes that, in some scholars´ opinion, needs to be placed in the orbit of the Roussillonais sculptor (BARRACHINA, 2007).

Certainly, the Roussillonais group of pieces attributed to Ramon de Bianya display significant similarities –Elna, Sant Joan el Vell, Canet-en-Roussillon–, suggesting the presence of the same sculptor, or perhaps the same workshop, which developed in Elna’s dioceses during the first quarter of 13th century. In general, all the sculptures show an outright classicism, evidenced by volume, attitude, and specifically by the meticulous treatment of drapery, emulating the Panneggio Bagnato technique, with minor folds shaped by converging oblique lines to the figure center. Revealing this utter classicism and a calligraphical mannerism, his sculptures have been related to the Italian area, especially with some productions of Master Guglielmo in Pisa and of Benedetto Antelami in Parma.

Far less certain is the supposed activity of the sculptor in the areas of Lleida and Urgell. The sculptures from Lleida and other parts of meridional Catalonia that have been attributed to him bear a resemblance, but also ostensible differences among them, particularly referring to the technical quality in the fabrication of drapery, much more schematic and linear, as we can observe in Anglesola and Vallbona. Accordingly, the historically established connection between the Roussillonaise sculpture and Lleida productions (GUDIOL I GAYA 1948:45) – capitals of La Seu Vella, relieves from Anglesola, capital of Tàrrega and tympanum of Vallbona de les Monges – should  probably be attributed to a common taste and sources coming from the Classical World, and not to the direct presence of the Roussillonais sculptor. This would justify the concomitances between Lleida and Roussillon pieces, but also between those located further away in Mediterranian areas, such as Provence or Pisa, where the classical conventions were never abandoned.

Ramon de Bianya was a sculptor with a taste for classic art and large format, whose activity was focused in the fabrication of funerary commissions for Elna’s bishopric. His funerary pieces, that demonstrate his mastery of sculptural practice (MALLET, 2011), display a range of features that denote Bianya’s predilection for this genre: standing figures dressed in long garments, hands crossed over the chest, representation of dextera domini over the head, angels with incense burners in both upper sides.

Concerning his origins, historiography has unanimously accepted the village of Bianya as Ramon’s birthplace. We have other examples, like the abbot of Sant Quirze de Colera, Ramon de Bianya (1270-1296), from whom it was kept until recently an inscription in the cloister (obiit/frater R de Biania)

Undoubtedly, one of the most relevant aspects of Ramon de Bianya’s work is the epigraph in Ferran de Soler’s Gisant. It is a controversial signature that has provoked a multiplicity of opinions.

Probably Bianya used premeditatedly the roman language, that is, Catalan, to give a speech to Ferran de Soler sculpture (Ramón de Via has made me and now I’ll be an image), and used Latin for an official written commemoration (bishop Ramon de Villalonga sepulcher).

This is not a fortuitous resource, with the inscription we can find a clear attempt of the artists to humanize the statue (it speaks: Ramón de Via has made me and now I’ll be an image). This volition makes us think of the legendary figure of Pigmalion, the Greek sculptor, and one of the main characters of Ovid’s Metamorphoses who managed, thanks to Afrodite’s intervention, to give live to the statue he was in love with: the famous Galatea.

-Inscriptions in the sarcophagi’s cover of Ferran del Soler (†1203), located on both sides of the Gisant.

Text on the right side:

Text on the left side:

-Inscription underneath the Gisant of the Bishop Ramon de Vilallonga (1211-1216), occidental gallery of Elna’s cloister: