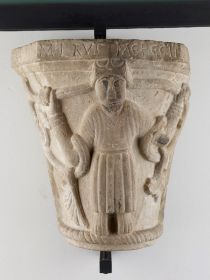 The identity of Mirus, or Myron, is known for the inscription which appears on two capitals from the crypt of Sant Pere de la Madrona, today at the Museu Diocesà i Comarcal de Solsona. The first capital (Inv. 157) is decorated with a barefooted figure in frontal position which is wearing a long close-fitting tunic, while it is holding with his arms two stems (CAMPS 1986) or strings (PUIG I CADAFALCH 1918) that emerge from his crown.

Undoubtedly, the most important element is the inscription of the abacus (MIRUS ME FECIT) which reveals the identity of the sculptor who made ​​the capitals and probably the responsible for the project of the church. The signature of the sculptor was already reproduced by Juan Serra Vilaró who identified Mirus with the building's architect. Soon after, Puig I Cadafalch echoed the inscription stating that the figure represented in the capital was the sculptor, while for others it could be a caryatid (SERRA VILARÓ 1909) or an Telamon (CAMPS 1986). The second capital (Inv. 159), which is decorated with floral motifs, contains the inscription URIM, which seems to be the term Mirus written in the opposite way. Although it is not preserved any firm that could certify it, it is possibly to attribute to this sculptor a third capital from the crypt (Inv. 158), that is decorated with figures of two faced centaurs.

The capitals of the church of Sant Pere de la Madrona have some points in common with the artistic production of the workshops of Santa Maria de Solsona, which are employed at the decoration of the cloister of the abbey from the sixties of the 12th century. In this respect, we cannot forget that the church is mentioned between the goods of Santa Maria de Solsona in the consecration of the church (1163). If we admit the relations of the capitals with the sculpture of the cathedral of Solsona, it is unlikely that the decoration of the crypt was realized before 1170

Capitals from the crypt of Sant Pere de la Madrona, preserved in the Museu Diocesà i Comarcal de Solsona

“MIRUS ME FECIT” [Mirus made me]