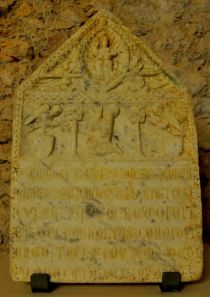 He was a canon builder manager (operarius) who was responsible for the administration of the work of the cathedral of Tarragona during the archbishopric of Pere d'Albalat (1238-1251). His name is known by the tombstone preserved in the Museu Diocesà de Tarragona where it was noted that, after dying on December 31, Raimundus of Miliano, had already finished the ten vaults that were built during his administration (decem voltas condidit).

He probably obtained the position of cathedral worker about 1246, when he first subscribes an undertaking between the Chapter and the city about funerary furniture. Although there is no doubt about his role as head of the financial management of the construction, as the tombstone mentioned suggests, some authors misidentified him as the builder of the vaults (RÀFOLS 1953; MORERA LLAURADÓ 1903). Likewise, historiography has repeatedly speculated about the identification of the decem voltas which are referred by Canon Mila, leading to a prolonged debate. According to Marià Marí, the vaults cannot be other than "the ten chambers or vaults of the cathedral." Sanç Capdevila qualifies the above statement, and he considers that eight of them are related to the aisles and the nave. On the other hand, Serra Vilaró states that the ten vaults which were made under Miliano’s administration were those ones which were built in the church of Santa Tecla la Vella and not those ones of the Seu, whereas, on the other hand, Dalmases-Pitarch place the vaults in the cathedral, but in the aisles. Liaño considers that the decem voltas which are mentioned in the epitaph could be three for each nave arising at the cruise, whereas the tenth one could be the dome itself, for whose elevation was required to support the arches and the vaults in the four adjacent sections.

Responsible for the administration of the work of the cathedral of Tarragona during the archbishopric of Pere d'Albalat (1238-1251).

In 1266, the day before the calends of January (December 31th), died Raimundus of Miliano, operarius of Saint Tecla, to whom he was entirely devoted by building ten vaults, and so he prays to God for Saint Tecla to be the intermediate for him (According to DEL ARCO MOLINERO 1914: 11).