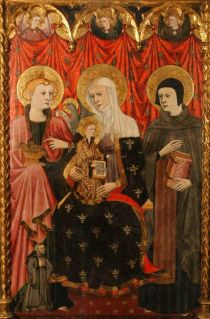 Painter native of Cardona (Bages), where he developed his professional activity. He stayed before in Barcelona, probably in order to learn his  trade. The oldest document known (1405) points out him as living in the Catalan capital and acting as a witness of the painter Pere Serra. This and the style of his paintings suggest that he was formed in the Serra’s workshop. The other documentation always designates him as a painter of Cardona, where he had properties and brothers. In fact, all the documented works, which are currently known, were made by him for Cardona. This suggests that after a period of training in Barcelona, he would be established in his native town where he absorbed the most part of the pictorial demand of his time. He worked on altarpieces for the parish church of Sant Miquel de Cardona and perhaps in some other altarpiece for the canonical of Sant Vicenç of Cardona. Since the origin of some of the works which have been attributed to him remains unknown, it is not possible to know if his scope was broader.

His style is clearly indebted to the formulas developed by the Serra. Despite the conservative nature of his painting, his works, which are neat, and endowed with effective compositional devices and effective chromatic effects, should complacently satisfy local demand, as it is evidenced by the great number of works that were likely or for sure painted by his hand for Cardona. The translation of the unusual hagiographical stories (Amador, Blas), gives his work an interesting iconographical originality.

In the early XXth century, Salvador Sanpere i Miquel (1906: 125-126) pointed out a table with the theme of Pentecost, then preserved in the sacristy of Sant Miquel de Cardona (today in one of the chapels of the church), considering it as a Lluís Borrassà’s work. A few years later, Josep Gudiol i Cunill (1924: 201-202), argued that the mentioned table of the Pentecost might come from an altarpiece contracted in 1375 with Pere Serra and dedicated to the Virgin. Two other tables which were also awarded to Serra, preserved in the Solsona’s Museum, with themes of the Annunciation and the Baptism of Christ, were also considered as parts of the same work. Shortly thereafter, Post (1930: 282-288) singled the author of the tables concerned and, unknowing his name, he designated him as “Mestre de la Pentecosta de Cardona”. He considered him not as a member of the Serra workshop but as strongly influenced by their productions, especially by Jaume Serra’s work, placing his activity in the early XVth century, and attributing him some other works, including an altarpiece of triple invocation (St. Anne, St. Amador and St. John) also preserved in Sant Miquel de Cardona, and a table which was then in a private collection in Budapest. The appendices that appeared in later volumes of Post studies, still added new works to the catalogue of a master whose artistic personality, despite remaining anonymous, was being defined: a table that has entered the Vic’s Museum, with the theme of the Meeting of Joachim and Anna in front of the Golden Gate of Jerusalem (POST 1933: 524), five crest tables probably from the same altarpiece dedicated to St. Vincent, a table with the theme of the Nativity of the Virgin, then in the Mateu collection of Barcelona, and one table of the Virgin surrounded by musician angels from a Parisian collection (POST 1933: 524), six tables from the Tintorer collection of Barcelona, four of which featuring St. Blas (POST 1938 : 741), seven compartments of the predella from Carl G. Hartmann collection of Barcelona and a pinnacle with two scenes involving St. Lawrence which had integrated a Viennese private collection (POST 1947: 744) and still (POST 1950: 298-300) another predella with six compartments occupied by various saints, which had been part of the James W. Barney collection of New York.

Madurell (1952: 191) published the contract for the altarpiece of St. Blas, signed in 1408 with Pere Vall, painter of Cardona, although its identification with the “Mestre de la Pentecosta de Cardona” came later (Ainaud 1962) and it would be immediately followed by all. Sureda (1977: 138, XX-XXI and passim) despite picking (p. 138) Ainaud’s indication, continues to maintain the title of “Mestre de la Pentecosta de Cardona” and placing its activity in the late XIVth century. Position that he will still maintain in a later work (1989: 177-181). Other authors will prevail, instead, Vall’s name above the initial anonymous designation (José i Pitarch – Dalmases, Alcoy , Melero, Orriols, Buttà).

The highest number of works attributed to Vall is provided by Gudiol and Alcolea (1987: 97-99). Later, it has been properly indicated that some of the attributions may not be accurate, and should consider the involvement of a partner of lower quality (Alcoy 1998: 239-240). In any case, it has been suggested Vall’s collaboration in later works of his probably former master, Pere Serra (Cubells and Sogorb altarpieces) in which also participated another disciple of Serra, Joan Mates (Alcoy-Miret 1998: 34-35).

On the other hand, some affinities of the production of Vall with works of Jaume Cabrera (Rajadell altarpiece) or his surroundings, as well as with anonymous painters debtors of Lluís Borrassà’s work (Master of St. Lawrence; the altarpiece of St. Margaret of Fonollosa (MEV) that focuses the arguably catalogue of the anonymous master to whom it provides the name) drawn with little sharpness for now, complex artistic connections between workshops and artists installed or occasionally actives in central Catalonia. Their study could help to redefine the catalogue of all of them, even if it is necessary to consider the suggested connections with the formerly named Master of Torà and with  a Pere Serra’s follower who was the author of the altarpiece of Castellfollit de Riubregós (Alcoy-Miret 1998: 34).

It was also set out to identify a possible member of Vall’s workshop (Pere Rubert) working with the painter Juan de Leví in the altarpiece of the Pérez Calvillo’s chapel of the Cathedral of Tarazona (Melero 2001: 85-86).