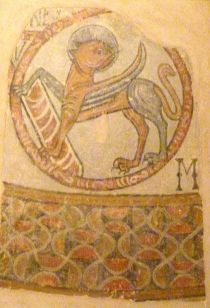 c. Late 11th century-first half of the 12th century

Despite the fact that he only mural paintings that could be attributed to Casesnoves Master are those from the church of Casesnoves, Mesuret (1967) also attributed to him the mural paitings of Marcevol. The study of Casesnoves paintings is hardly difficult due to the vicissitudes they suffered when they were discovered in 1954. Marcel Simon transferred them before selling them to different purchasers. Currently, most of the fragments are still preserved in the sacristy of the Hospice of Ille-sur-Tet, whereas the rest of the fragments are stored in the Abegg Riggisberg Foundation, near Berna. Given the rough contribution of the restorer it is hardly possible to establish accurately its stylistic features. Scholars have highlighted its linear style, the lack of volume and the narrow range of colours of the painter’s colour palette, which links him with illumination praxis. It has been also considered the fact that this archaism shows an earlier execution from the second half of the 11th century (Wettestein 1978), late-11th century (Durliat 1954) or around 1100 (Durliat 1961) even if some scholars have suggested a chronological framework in the first half of the 12th century  (Poisson 1992), between 1130-1140 (Castiñeiras, Leturque, Rollier-Hanselman, Mazuir 2015), or between 1125 and 1175 (Piano 2011).

These paintings are less archaic than what it was thought on the first place. Some fragments show a skilful model as in the body of St. Mark’s lion, which is highlighted in red and white following the anatomical lines and giving the figure some volume. There is a similar solution in the Virgin and Child from the Epiphany. Although these black highlighted elements and profiles render the colour modelling more solid, it is highly likely this was a restorer contribution since on the right part of the scene he restated the two latest Magi profiles and he intensified the profile of the first Wise man.

Sometimes, colour assumes a decorative role as in St. Mark’s lion, where grey and yellow are alternated in the legs, or even in St. John’s eagle, where the feathers are decorated with three interchangeable colours. It actually seems as if Casesnoves Master experienced some difficulties in fashioning the human figures. Under-eye circles are excessively thick rendering the eyes of Christ in the Mandorla thicker as if he was wearing a mask and the design of the hands is slightly rough. On the other hand, Christ’s right sleeve is featured as a long curved line that reassembles Sant Climent of Taüll’s Christ. Hence, it could be presumed that his linear style, which shows the master’s knowledge of contemporary models, has nothing to do with paintings archaism even if he is more skilful in featuring animals than human figures.