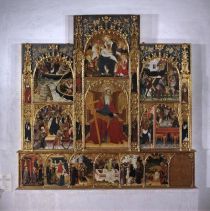 Tempera on wood and gold leaf

Ch. R. Post renamed this painter as the so-called Master of Roussillon at the beginning of the 20thcentury. His style was individualized through the analysis of the Altarpiece of St. Andrew, today preserved in the Metropolitan Museum of Art de Nueva York. Nevertheless, the study of this altarpiece shows the contribution of his workshop. This painter worked mainly in Perpignan and the territories of Girona, where he painted two altarpieces for the villages of Fortià and Castelló d’Empúries (Gudiol-Alcolea, 1986), wether his identification as Arnau Pintor (doc. 1385-1440), is right or not.

His catalogue raisonné was increased by Marcel Durliat (Durliat 1952, 1953 y 1954) around 1950s, as well as by Rosa Alcoy (Alcoy 1998), Francesc Ruiz Quesada (Ruiz 2005) and Lorena Garcia (Garcia 2011 and 2012). These scholars agree about the strong influence that Borrassà and his followers as well as Girona’s panel painting, especially Joan Antigó and Honorat Borrassà, exercised over this master and his workshop in the second half of the 15th century. The identification of the master as “Arnau Pintor” seems to be the most supported (Alcoy, Garcia). It is also highly likely that Jaubert Gaucelm (doc. 1393-1440) acted as his predecessor. Lorena Garcia has recently established Arnau Pintor’s possible itinerary (Garcia 2012). On the other hand, some other scholars identify Jaubert Gaucelm or Bartomeu Capdevila (doc. 1411-1460) as the Master of Roussillon (Ruiz 2005).

There are four works that could be attributed to Roussillon Master:

Some othe works have been also attributed to the painter not without any doubt. This is the case of the altarpiece of St. Nicola of Cameles (France), which is usually attributed to Jaubert Gaucelm (1393-1440), due to its close relationship with Serra’s workshop (Ruiz Quesada 2005). In fact, there is some documentary record about Jaubert Gaucelms training in that workshop. Secondly, ithe predella of an altarpiece today preserved in the parrish church of Le Boulou (France) has also been attributed to him, even if this work could be not considered on the basis of stylistic reasons. The last work that has been attributed to the painter is the altarpiece devoted to St. Andrew depicting the appearance of the saint in front of a bishop in order to drive away temptations. Despite the fact that iconographical elements link this work with other works of Roussillon Master, stylistically there are not enough reasons as to attribute it to him.

Roussillon Master’s style could be inscribed into the International Gothic style. His works feature a wide range of architectural backgrounds and iconographical elements. For instance, his altarpieces lack the scene of the crucifixion in the crown, which is replaced by scenes of baptism or depictions of the Virgin. It is worth mentioning the importance of contemporary sources and other less known sources as traditional legends of Roussillon.