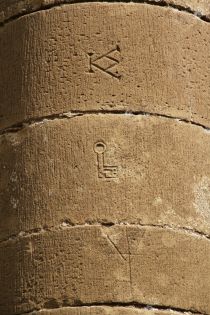 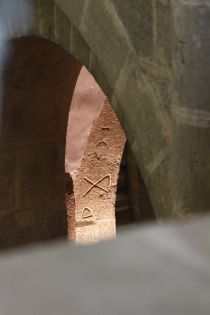 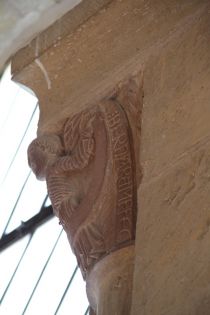 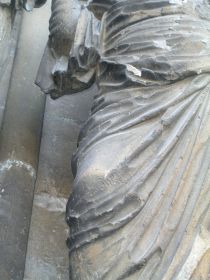 First masons' marks with the same meanings they convey within the Middle Ages could be traced to Antiquity (BEGG 2004). They still existed in the Byzantine milieu in the 6th century but then they disappeared until the beginning of the 11th century when they spread until the modern era.

In studying the issues concerning “masons' marks” it should be taken into account the different terms commonly used to refer them (VAN BELLE 1983). There are a large number of carved and painted signs on medieval building’s stones. All these signs are categorized and studied by glyptography. In this regard, it would be more accurate to talk about “lapidary signs (signes lapidaires)” instead of “masons’ marks” since those signs were not only used by carvers or other stonemasons in order to get paid but for other uses as well. In the case of the marks of the chapel of Sant Josep of La Seu de Manresa all the signs are associated to shoemakers guild showing the complexity of these issues (FRAGO I PÉREZ 1987).

If we left behind the signs that are not associated with masons’ work (that is graffiti, consecration crosses, other captions, etc.), there are two main types of signs. On the first hand, there are signs indicating the position or the place in which the stone should be laid. On the other hand, some marks should be understood as signs that mark the working of a piece of masonry by a particular mason or workshop.

These signs could be carved, engraved, drawn (with coal or chalk for instance) and the carved signs could be even painted. Most of the medieval marks that are preserved are mainly carved due to use and preservation reasons. Those marks are normally to be found in the walls but they could also be placed on the hidden faces of the stones. Commonly, masons' marks are found just in a few stones of the whole building and sometimes they appear in a very specific location (dome, voussoirs, portals…). There are no cases in which all the stones have been carved with a mark. However, there are a lot of examples of buildings in which most stones have been carved with a mark (wall of the tower Saint-Laurent from the Palais des Papes in Avignon). Similarly, the cases in which there is not a single stone that has been carved with a mark are extremely rare (ESQUIEU et al., 2007).

Masons' marks adopt several forms. Some of them are associated with their use: characters, geometrical signs, figurative signs (usually a tool associated with stone carving), Roman numerals (usually indicating the position of a single stone within a whole group of them), double marks (two different types of marks within the same stone) and a full name, which is sometimes followed by the caption me fecit.

There are several types of lapidary signs. Different categories are established on the basis of its function:

There are also some masons' marks whose function has not been undoubtedly determined yet. However, it has been suggested by some scholars that those marks were often employed to mark the working of a piece of masonry by a particular mason, in order to claim payment. Eugène Viollet-le-Duc suggested this idea for the first time on his Dictionnaire raisonné de l’architecture française (1854-1868, VI, p. 454-455). He proposed that masons’ marks represent eloquent proof that stonemasons were not paid on a daily rate but on their work performance. This idea has been discussed on the basis that those signs are not be found in all the stones but they were carved in a few of them. It could be assumed that a single sign only applies to a specific group of stones. If Viollet-le-Duc’s idea were right, it would be easier and simpler to employ an ephemeral marking system like drawing or painting the mark instead of carving it. Besides, the wide range of signs in some buildings makes it difficult to associate them to specific individuals (483 different marks were found on the tower of the village of Vincennes (CHAPELOT, 1994). Some other hypotheses suggest those marks are evidence of some stonemasons’ status as if they were control marks or lots of stones.

There is no simple explanation since it varies depending on historical periods, regions and works. Each place provides a different working system. For instance, in religious architecture from Romanesque Provence, masons' marks are associated with different sculptors, who could be traced from one church to another. Otherwise, masons' marks are concentrated in specific parts of the building (shoring, vaults, domes, arches, etc.) indicating the presence of a specialized team of stonemasons, who placed their signature in a privileged part of the monument or were responsible for the construction of an important part of the building (Y. ESQUIEU et al., 2007). It is worth noting that a single mark could be associated to an individual or a team. Finally, it is significant mentioning that some signs bear constant repetition as the “A” found in all regions and periods even if only a few medieval names begun with the letter “A” whereas most of them begun with letters “P” or “R” (Y. ESQUIEU 1992).

On conclusion, this wide range of marks on the same building shows how difficult is to explain masons' marks meaning as demonstrated in Lei Huang’s recent study on masons' marks from the Abbey of Sainte Foy de Conques (Huang, 2014).