Registration payment for the Magistri Cataloniae's Symposium, Artista anònim, artista amb signatura. Identitat, estatus i rol de l'artista en l'art medieval, is available.
In order to book a place, fill in the form you will find in the site: www.simposi-magistricataloniae.org
Registration will take effect only after the payment.

The International Conference The Making of Jerusalem. Constructed spaces and historic communities, has been organized by the Armenian Patriarchate of Jerusalem and supported by the St. Sarkis Charity Trust (Londres) and the Calouste Gulbenkian Foundation (Lisboa). It will take place on 2 -4 July 2014. Avital Heyman, researcher from our research project MAGISTRI CATALONIAE, will present the lecture "The Virgin Mary heading a Franciscan procession in the Old City".

PLink to the Programme

The research project Magistri Cataloniae has collaborated in the organization and has participated through the following papers:

Next June 2014, Majo Alcayde, research of our research project Magistri Cataloniae, will held the conference "Identification of Oils and Protein binders in Romanic Paintings by Matrix-Assisted Laser Desorption/Ionization –Time Of Flight Mass Spectrometry", in the congress art'14. 11th International Conference on non-destructive investigations and microanalysis for the diagnostics and conservation of cultural and environmental heritage. 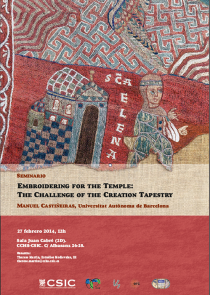 Next 27 february 2014, Manuel Casriñeiras will held the seminar "Embroidering  for the Temple. The Challenge of the Creation Tapestry" for the session organized by Therese Martin at the CCHS-CSIC.

On 29 March, Manuel Castiñeiras will participate on the Symposium dedicated to Paula Gerson that will be held at the Columbia University with the lecture: "From Santiago to Jerusalem: Performing the Romanesque Portal in the Age of Pilgrimage".

On Wednesday 5 February, Manuel Castiñeiras will participate on The Annual Lecture Series of the British Archeological Association with the The George Zarnecki Memorial lecture, entitled: "The Romanesque Portal as Performance".